Russia, which covers an eighth of the Earth, remains a leading supplier of the carbon economy and its government seems unwilling to change course: In a place where Chernobyl continues to be a living memory, the government is shipping a floating nuclear reactor across the Arctic Ocean. Yet The Coming World: Ecology as the New Politics, 2030–2100 at the Garage Museum of Contemporary Art in Moscow is a remarkably insightful and challenging exhibition on the climate emergency.
Hyperallergic Link to Story

When it comes to Stalin, he manages to be everywhere and nowhere at once. There is still a fascination with power, and pride in how the Great Patriotic War turned out. While in the West he remains a reliable boogeyman for anti-leftist name-calling, at home it is more complicated.
Popula Link to Story

Russian Authorities Order the Destruction of a Digital Artwork

In what may be the first recent case of Russian authorities ordering the destruction of a specific work of art, a St. Petersburg court is in the midst of hearing an appeal into the case of a work that shows the disintegration of a photo of President Vladimir Putin — it was seized as part of a demonstration last spring. Artists and activists involved in the case are unlikely to succeed in the courts, but they say it is a priceless opportunity to discuss censorship in Russia today.
Hyperallergic Link to Story

I spent a day at "Kaapeli" earlier this summer as part of my research into how old industrial spaces are finding new life and uses. In the Berkshires we've had a few success stories, like seeing the old Sprague Electric plant become Mass MoCA, and a few stories that are still yet to be told. Converting factories to make culture is a long established idea in Europe — according to legend, Thomas Krens had the first spark of the idea for Mass MoCA on a trip to Germany in 1985. But what I found in Helsinki was a completely different way of thinking about these kinds of transformations.
The Berkshire Eagle Link to Story

For nearly 20 years Trenton Doyle Hancock has been exploring “Mounds” as an organizational and a metaphysical system. Through paintings, comics, sculptures, and gathered objects like board games and collectible toys, he has built an elaborate mythology around his sentient Mounds and their “Moundverse.”
Hyperallergic Link to Story

To look back at the news from last October, when Liz Glynn’s show opened at the Massachusetts Museum of Contemporary Art, is to be stunned by how much has come at us and how quickly. During that first week of October 2017, a concert in Las Vegas became the site of the worst mass shooting in US history.
Hyperallergic Link to Story

The fastest way to drive from the airport outside Tbilisi into the capital takes you along a stretch of highway called President George W. Bush Street. Having lived through the Bush years I guess I'd resigned myself to someday seeing such a place name in Texas somewhere, but certainly not in a foreign capital.
The Berkshire Eagle Link to Story

Art and theater confront, confuse and annoy in performance piece at WCMA

Chris Burden's notorious performance art piece, "Shoot," is never going to happen again. Even if you could somehow organize a re-enactment of the piece — in which the artist had a friend shoot him in the left arm one night in November 1971 — it would have a different capacity to shock or surprise.
The Berkshire Eagle Link to Story

There's a bit of a "ripped from the headlines" vibe to "17c," Big Dance Theater's new work based on the diaries of Samuel Pepys. Since the Harvey Weinstein news, as each new day brings new accusations against another man abusing his position to sexually harass women, it feels like we're yet again facing up to an eternal problem.
The Berkshire Eagle Link to Story

At Mass MoCA, Nick Cave's "Until" is a challenge disguised as an invitation

The scale of "Until" is a new frontier for Nick Cave for whom dance and fashion were an enduring interest, until the videotaped police beating of Rodney King in Los Angeles in the 1990s changed everyone's focus, including his. Nick Cave's work is going to get your attention. When it works, it invites you into a world familiar but strange, but certainly a place you've never seen before and probably won't again.
The Berkshire Eagle Link to Story

Digging Up the Past

In 1962, Soviet police fired on a crowd of peaceful demonstrators in the industrial city of Novocherkassk. It was one of the biggest domestic disturbances over the 70 years of Soviet rule. Yet even today, for Russians, the event is shrouded in misinformation, rumor, and myth.
Russian Life magazine Link to Story

The People Behind the Numbers

Whenever Russian and American relations look discouraging, which is very often lately, I think about my infant daughter's late great-grandfathers.
The Boston Globe Link to Story
View More Stories

I'm a writer and editor currently based in western Massachusetts. I'm a frequent contributor to The Berkshire Eagle in Pittsfield, Mass., my work has also appeared in Popula, Hyperallergic, The Boston Globe, the International Herald Tribune, The Moscow News, Russian Life magazine, and Williams magazine.

For many years, I was the Eagle's North Adams bureau, while also writing about the arts and contributing editorials and OpEd columns. I began my career with the international editions of Newsweek, and later covered national energy policy in Washington.

I'm originally from western Massachusetts, and went to the University of Pennsylvania, where I studied English and History. I also graduated from the Columbia University Graduate School of Journalism.

I'm currently based in Williamstown, Massachusetts, and have also lived in Moscow, where I was the sports columnist for The Moscow News, and in Budapest, where I was a book editor for a university press.

I also teach courses in nonfiction and journalism at Williams College. There's more of my writing at medium.com/@cwmarc 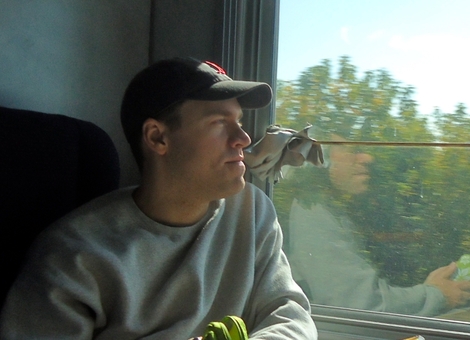